Dear one, it would seem a bit redundant if you were asked to fasten your seat belts again because the incoming energy has been coming in so quickly there has scarcely been enough time to draw breath

Just a quick warning, till I find time to write more.

Our Karma is Lit Up Strongly between now and 2 November 2019 (10pm PDT), particularly our Habits of Giving Away our Power to whomever Asks for it.

And we’re already Feeling a Disturbance in the (Life) Force as our Vitality is Illuminated between now and 4 November (1am PST).  This Disturbance may be for many a Turning Point in the Climate Change Emergency, as we reach a dual Decision point between Fate and Choice, and between Victimhood and Taking Charge.

Dwarf planet Varuna (the Life Force, Vitality) is Stationary (Strong) as one arm of a Kite (Grace Directed toward a Cause) with the Truth of our Values (asteroid Aletheia Conjunct Venus) on the other arm.  The central axis…

We are within the New Moon energy.
The Universe is encouraging us to take a deep look within.
What is it we are creating in our life
What is it we are allowing
What is it we are expressing or not expressing
What is it we are hiding
What shall we take with us on our journey towards manifesting our True selves?
You may be dealing with challenges but upon deep reflection you come to realise
Whatever challenges that come your way
Are enabled by the Divine for a higher purpose.When you realise you are not merely here to ‘dodge bullets’ but actually here to Rise Higher because of these challenges , then you begin to understand Grace and the Magic of your Existence.
When you understand nothing happening to you is here to give you a hard time, but actually to give you an opportunity to show yourself and…

We are keeping up our side of the agreement that we have with humanity. We are checking in with all of you on a regular basis, seeing what it is that you need, and delivering to you the energies, the downloads, the upgrades, and the activations that you all request. Now, we are also encouraging all of you to relax more and do less because this is a team effort. And right now, your role on the team is to receive what you’ve already asked for and what we are consistently delivering.

Two of the most destructive words anyone can utter; “I can’t”.

“I can’t” denies The

Crossroads: Moth To A Flame

Moth: I gave you my life.

Flame: I allowed you to kiss me.

CrossRoads!! That is where we are Energetically.

A Crossroads of Karmic vs Soul Relationships/ Timelines. Both have the attraction component of A Moth ( masculine) To The Flame ( feminine) ….but while Karmic attraction walks the path of Falling ( literally falling) in ” Love” , The Soul Connection Attraction …calling two Wholesome Souls to ” Rise Transformed in Love” post the healing of the Masculine. Sex/ Sexual Energies  act as a bait in both scenarios. In Karmic relationships Sex is the Trap of base physical satisfaction ( Scorpion energy of Scorpio). At Soul Connections Sex is the Transformational Fire of Phoenix Energy of Scorpio ,which Transforms both who enter to a higher Consciousness.   Patience is called for …we will soon be entering Scorpio Energies in November and thats… 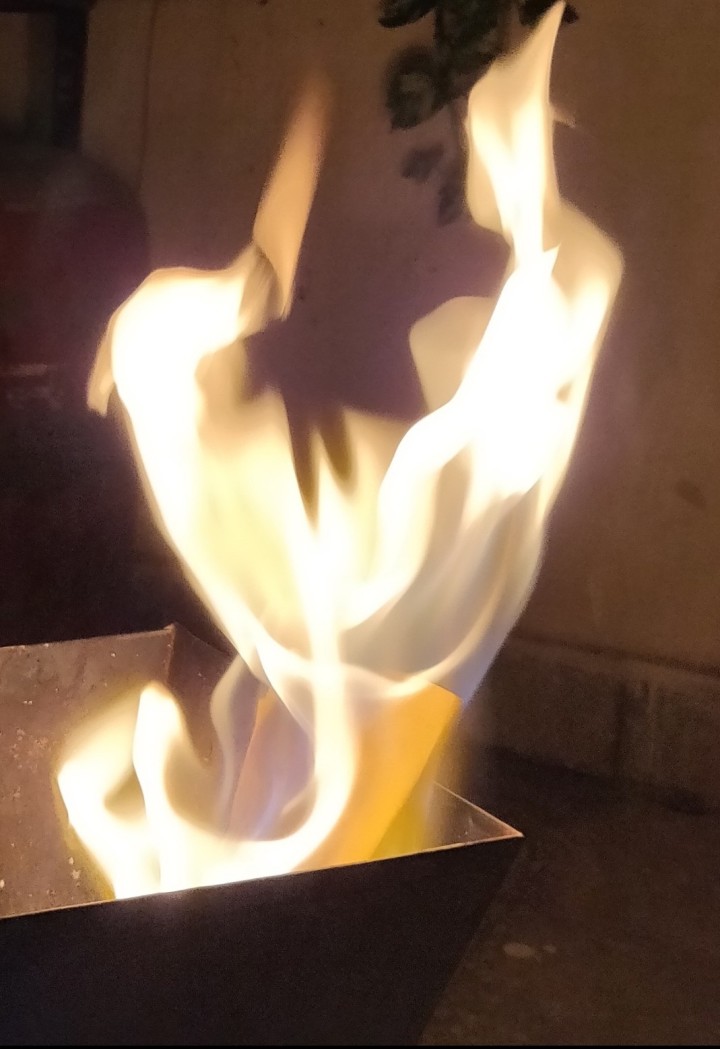 As you can see a clear Scorpio emerged in the Flames and the channeling that came with it was ..

It is Time Now to Return to the Original Sacred Marriage/ Partnership based on the Sovereignty of the Feminine held in the Protective embrace of  Reverence of The Masculine. Even though you know you can feel, know and decipher more than the limits masculine reasoning will ever permit, you consent to…

The Scorpio Dark Moon opens a Gateway to Be Released of All Cords and Attachments to those Soul Connections that we have Wronged , either intentionally or unintentionally in any and all spirals of time ( Past , Present ,Future, and Dimensions).

Call on the Transformational Fires of Alchemy of Bast as Phoenix Energies of Kundalini Life Force to clear you of All Cords and Attachments that are attached to your Kundalini Life Force, as a result of Acts of wrong doing or Betrayals that you have committed across timelines. And Ask for their Forgiveness so that All Soul Connections concerned are returned to their highest and Sovereign Aspects ( without negative cords/ attachments binding them).

Anywhere you make the world more important than the assistance that would guide you through it, fear will arise. Fortunately for you, it is a very good thing that the assistance that would guide you never leaves you, cannot leave you. It takes no coffee breaks. Also fortunately for you, it is a blessing when fear is revealed and recognized. To call fear an enemy would make a something out of a nothing, but the nothingness of fear is what you use to block the experience of complete safety, security and rest. When it seems that safety, security and rest are being withheld from you, rest assured that it is always you who are blocking them. This is very good news. It attests to the impossibility of victimization.

When fear comes, it is because you have already accepted it as a foundation and as an identity. When you become aware…

Jesus wants us to know…..

If you have spent some time here at soulsoothinsounds you’ll notice I bring up the patriarchy a lot.  And it’s primarily to remind us that it hasn’t gone anywhere.  That it’s still here, and it’s trying to maintain control on the planet.  It senses that there’s a new gal in town, and that it may be gasping its last breath.